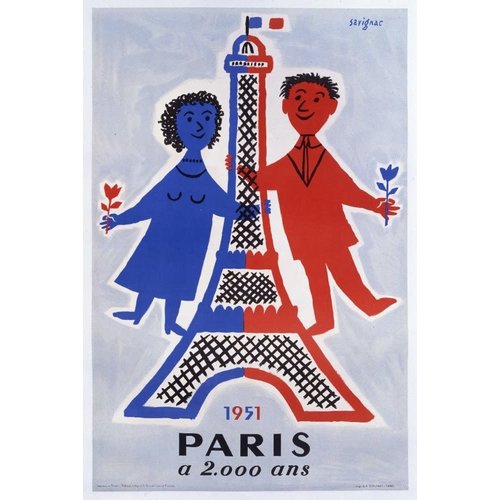 Raymond Savignac (known simply as "Savignac") displays his signature simplicity and light-hearted whimsy with this charming poster celebrating the 2,000th anniversary of Paris. Two smiling Parisians of the giant variety are scaling a miniaturized Eiffel Tower, the iconoclastic symbol of Paris, with a flower in each hand. They are most likely planning to present these flowers to the city by planting them atop the Tower alongside the French flag.

This red and blue poster reflecting the colors of the French flag is an affectionate tribute to the city where Savignac was born and to its residents.  As such it's a compelling invitation to the world to come and visit and join in the celebration. It was printed in both French and English.

Regarded  as one of the great poster artists of the modern era, Savignac (1907-2002) was artistically self-taught.  After starting his career working under the artist Cassandre, Savignac went on to develop a unique style all his own. His flat figures and lighthearted, sometimes silly images were both charming and fresh, a perfect combination as advertising evolved to appeal to the masses. Critical of ads that lacked humor, he often made gentle fun of the products he was being paid to promote.

This is a poster you will love owning. 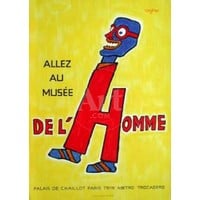 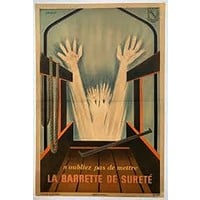 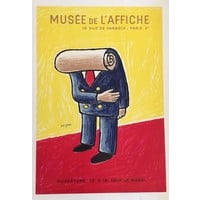 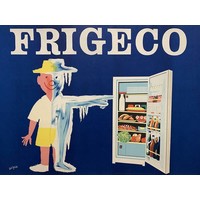 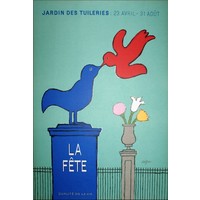