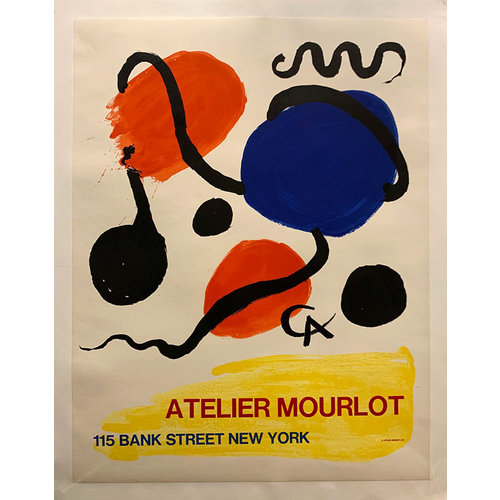 This fabulous lithographic poster was printed by The Atelier Mourlot in New York in 1967.  Its design is inspired by Alexander Calder’s work, in particular the mobiles for which he is most famous.

The Atelier Mourlot, established in 1852 in Paris, began as a producer of wallpaper.  In the 1920s it expanded its business to include printing original lithographic works for prominent artists, including Picasso, Matisse, Braque, Miró, and Chagall.

In 1967, it opened a studio on Bank Street in New York City and collaborated with American artists including Rauschenberg, Lichtenstein, Calder, and Oldenburg to produce contemporary lithographic works of art.  This lithographic poster inspired by Calder's work was produced in conjunction with this opening.  The New York studio closed in 1999.

Alexander Calder (1898-1976) was an American sculptor best known for his mobiles --innovative kinetic sculptures which, through movement, continually changed their appearance and aesthetic appeal.

His work is in many permanent museum collections in the US and throughout the world, including the Whitney Museum of American Art and the Museum of Modern Art in New York, as well as the National Gallery of Art in Washington and the Tate Modern in London.

This engaging poster with its abstract design and its clean, black lines punctuated by spots of bold primary colors would look fabulous in a home with contemporary furnishings. 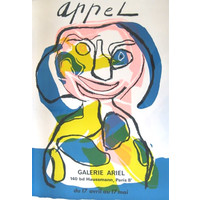 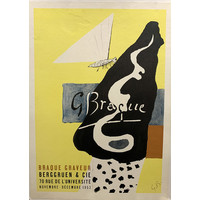