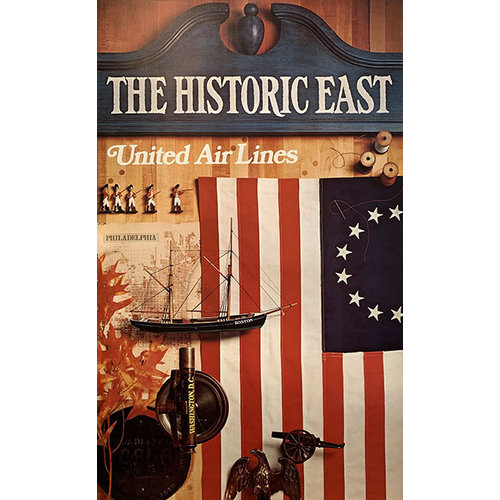 This original United Airlines travel poster tells the viewer to visit the “Historic East” but doesn’t say exactly where that is. The viewer has to figure that out, but the collage-type graphic gives many hints. The corner of an old map of Philadelphia and the name “Boston” on a toy ship placed in front of the map make it obvious that the Historic East includes both cities. The spyglass that says "Washington D.C." tells us that our nation's capital is also part of the Historic East.  Other clues -- such as the American flag with its circle of 13 stars (newly sewn, judging from the spools of thread beside it), the toy soldiers dressed as British redcoats, the miniature cannon and the eagle suggest that the Historic East also includes all the areas in the eastern part of the US where the Revolutionary War was fought.

This poster was launched in 1972, which was just prior to the 1976 Bicentennial when the US celebrated the 200th anniversary of the adoption of the Declaration of Independence. An interest in the country’s struggle for independence and its Revolutionary War was peaking at that time, as was patriotism, and United Airlines was selling both.

What is somewhat amusing is that in this “I Spy” poster, one of the items spied is some fall foliage, which seems a bit incongruous with the rest of the spied items of historic interest. New England has always been famous for its lovely fall foliage, and clearly the message here is that, if you’re thinking of going to New England for your tour of historic sites, why not go in the fall, when you can also experience fall foliage at its loveliest. This message obviously was aimed at west coast tourists, as well as southerners, who, even today, visit New England to enjoy the fall colors.

This interesting poster reminds us of important times in our country’s history and is a nice addition to every collection and every home and office wall in need of a decorative yet historic touch. It is an especially nice poster for a child’s room because of its historic value and its “I Spy” features. 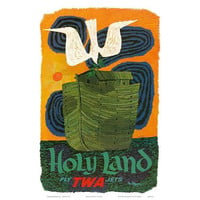