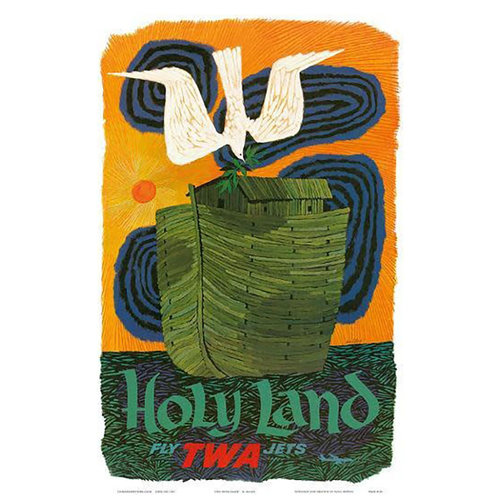 This fascinating poster promoting travel to the Holy Land invokes the Biblical story of Noah’s Ark, showing the Ark along with the dove returning to the Ark bearing an olive branch after being released by Noah. The sun is shining brightly, and blue clouds dot the sky. The flood is clearly receding. At the bottom of the poster are the words "Holy Land," and it looks as though this is where the Ark is headed.

What makes this poster so visually arresting is that the artist, David Klein, uses a design resembling a woodcut relief pattern, which is one of the oldest techniques used in fine art printmaking.  This is how he gets his travel poster to look like it was an original plate from a very old Bible rather than a more contemporary design.

Travel has improved since Biblical times, so that by the 1960's when this poster was printed, an ark was no longer needed to travel to the Holy Land; TWA could get you there on a plane so that you could explore firsthand the birthplace of your faith.  This was a very powerful message.

David Klein (1918-2005), a commercial artist from Texas who settled in New York, was the illustrator for many advertising campaigns for Broadway shows but is best known for his travel posters, particularly for those he did for TWA during the 1950s and 1960s.

This interesting poster, with its design resembling a woodcut relief pattern, adds a visually unique look wherever it's placed.