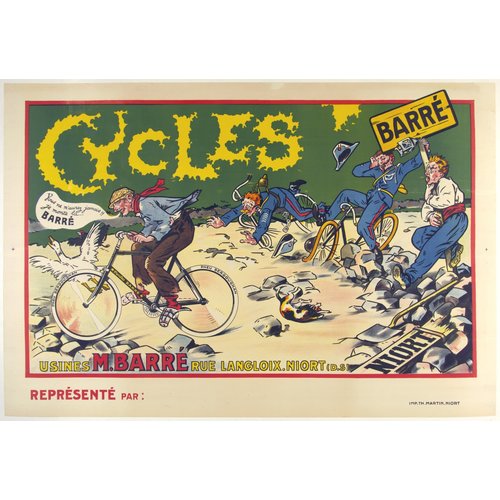 This vintage poster is an advertisement for Barre bicycles from France. It appears to show a man fleeing on his Barre bike from 2 pursuers wearing official uniforms (policemen? soldiers?) who are losing the chase when their (inferior, not-Barre) bikes are wrecked on the rock-strewn terrain. It has a cartoonish quality and the feel of a slapstick chase scene captured from one of the early silent movies produced around that time.

The bicyclist in the lead is yelling, “You will never get me! I am riding a Barre!” He has a maniacal, gleeful expression and is wearing tattered clothing and going very fast, as his scarf and shirttails are blowing behind him. Maybe he is a criminal, or maybe he is a man unjustly accused of a crime. But, as we see, because he has such a superior, fast and nimble Barre bike, he has managed to maneuver around the rocks, avoid the dog, shoo away the geese and be on his way to … perhaps Niort, France (coincidentally, where Barre bicycles were made).

The third pursuer (the one running) is in a sense the town crier, as his mouth is wide open and he is also yelling something, perhaps “Barre,” as he carries the Barre sign that makes it abundantly clear to all who see the poster that it is about Barre bicycles. It’s not entirely clear, however, exactly whose side he’s on, but he’s definitely an interesting fellow. Also interesting are the raggedly yellow letters at the top of the poster that spell out “cycles.” They add a sense of motion and disorder to the already chaotic scene.

However you interpret this story, you will enjoy this poster’s 100+ year old illustration and the historical tidbits gleaned from it. Barre produced bicycles during the cycling boom in France in the late 19th century before switching to automobile manufacturing in Niort, France. This poster also advertises the tire brand, “pneu Bergougnan” on the bike’s obviously indestructible tires. Pneumatic tires for bikes were developed in the second half of the nineteenth century, and Bergougnan was one of those tire manufacturers in France.

Whether you are a cycling enthusiast or a history buff or a vintage poster admirer, you’ll be intrigued by this very fun poster. 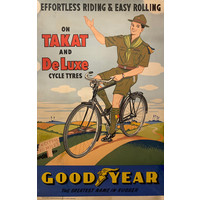 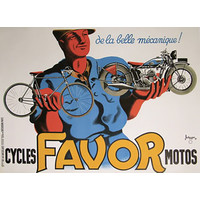