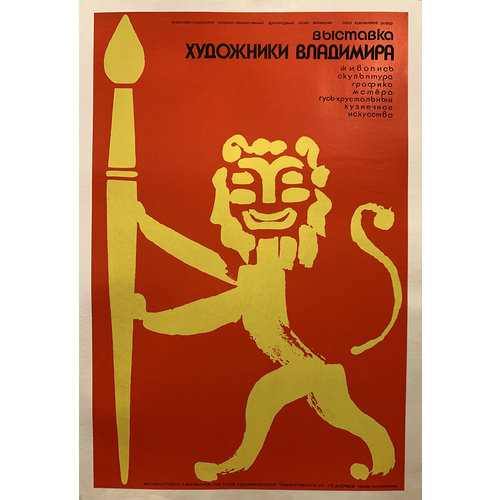 This rare 1960s poster from the Soviet Union advertises (in Russian) an  artists' exhibition in Vladimir City.

The lion posing in this fabulous poster is no doubt an artist himself because he has his paintbrush at the ready.  His stenciled face, so wonderfully expressive, is turned and is looking at the the viewer who can't help but notice his happy lion grin. His yellow color, is bright against the bold red background.

Standing erect on his hind legs, forepaws raised, he strikes the pose of the traditional rampant lion in heraldry. And in fact, he bears a resemblance to the rampant lion on the coat of arms and on the flag of Vladimir City.  However, the city's rampant lion, also boldly yellow against a red field, holds a tall gold cross (one that would be carried at the front of a procession) instead of a paintbrush. This poster's substitution of the paintbrush for the cross gives a nod to the city's history while remaking the traditional design in a clever way to promote the arts.  This is creative poster designing at its best!

This poster makes a fabulous addition to every collection of posters from countries around the world, especially from Russia and the USSR. 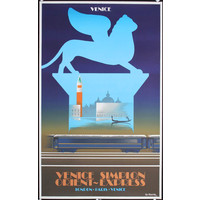