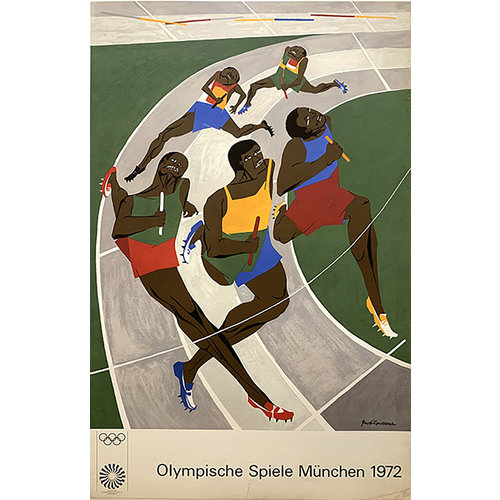 This work by African American artist Jacob Lawrence is one of a series of posters by famous artists selected by the 1972 Munich Olympic Committee to design posters for an advertising campaign that would unite art and sports.  The artists could choose their own themes as long as they did justice to the ideals of the Olympics.  This poster is signed in the plate by the artist and is one of a limited edition of 3,999.

Lawrence has created a powerful image of track athletes competing in a relay race. As the runners surge to the finish line, their expressions reveal the total focus and extraordinary physical effort each is pouring into his performance.  Their muscular bodies show how intensely they have trained and are  competing for the prize – an Olympic gold medal.

The runners’ attire, even their shoes and batons, carry the five colors of the Olympic rings and add bold splashes to this action poster which reflects the flat, somewhat Cubist design techniques Lawrence often employed.

This image honors the exceptional role that Black athletes have played in track events at the Olympics, going back to Jesse Owens and his record four gold medals at the 1936 Olympics hosted by Germany, then under Hitler rule.  The 1972 Munich Olympics marked the Games’ return to Germany for the first time since 1936.

Jacob Lawrence (1917-2000) was born in New Jersey and lived in Pennsylvania before moving to New York City with his family at age 12.  Known for his portrayal of the lives and struggles of African Americans, he became the most widely acclaimed African-American artist of the 20th Century.   His works hang in many museums across the country.

Lawrence’s 1971 painting, Study for the Munich Olympic Games Poster, on which this poster is based, is owned by the Seattle Art Museum.

If you enjoy collecting  posters from the Olympic Games, this is one you must have. 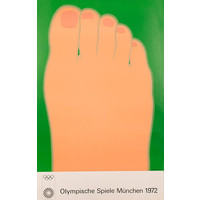 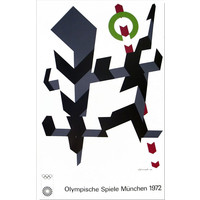