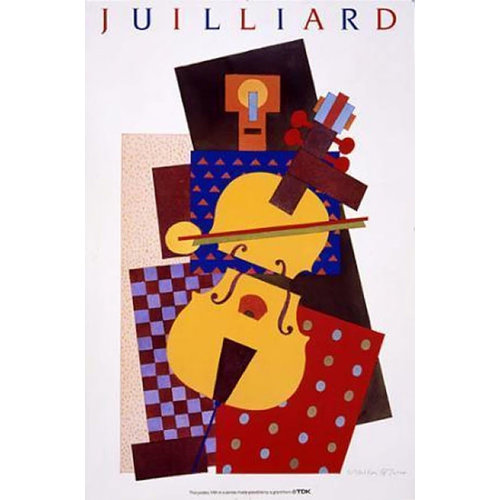 In this playful and colorful design, the cellist and his cello are intertwined and in tune; having played together so long, they have started to resemble each other (especially their heads).

Poster designer Milton Glaser has drawn both musician and instrument using an abstract cubist style, with rectangles and squares that form them and surround them, creating one musical unit.  According to Glaser, the idea for using a cubist design for this man/musician portrait came from Picasso’s cubist painting of three musicians.

Printed in 1991, this poster was commissioned by the audio tape manufacturer TDK to promote The Juilliard School, a performing arts conservatory in New York.  It was the fifth and final poster in this series.

Milton Glaser (1929-2020) was born in New York City where he spent his long career as an illustrator and graphic designer.  He was one of the founders of Push Pin Studios in 1954 which became known for its innovative designs.  His prolific works include not only this impressive poster but also the I ❤ NY logo, the iconic Bob Dylan psychedelic poster and the logos for DC Comics and Brooklyn Brewery. His artwork has been featured in numerous exhibits and placed in permanent collections in many museums worldwide. He was the first graphic designer to receive the National Medal of the Arts Award, which was bestowed on him by President Obama in 2009.

This fun poster will feel at home in any room! 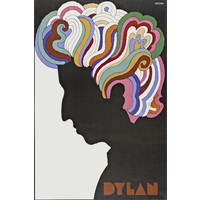