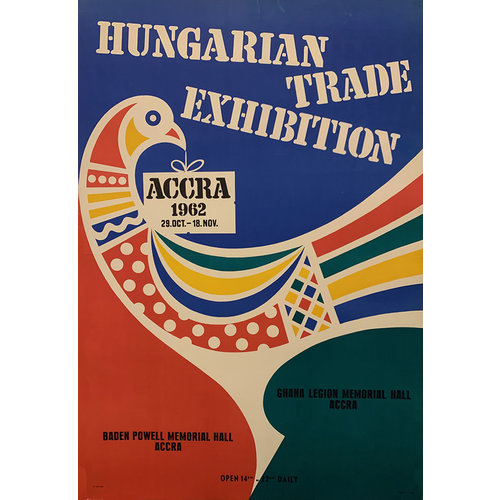 This rare, beautiful poster announces the 1962 Hungarian Trade Exposition in Acca, the capital of Ghana.  Like many posters, it has an interesting backstory.

After Ghana gained its independence from Great Britain in the late 1950s, Ghana’s leader began to align his country with the Soviet Union.  At that time, the Hungarian People’s Republic was one of the Eastern Bloc countries controlled by the Soviet Union.

This set the stage for the Hungarian Trade Exposition held in late 1962 in Ghana as promoted by this poster.

The other interesting aspect of this poster is the artwork --- a beautiful, brightly colored bird.  The bird looks more like it belongs in Africa than in Eastern Europe, and in fact the bird is an artistic depiction of the mythical, symbolic bird in African culture called Sankofa which has its feet pointed forward but its head turned behind it. The bird is often depicted with an egg in its beak, but instead of an egg this Sankofa bird is holding a sign advertising the trade expo.

Vintage posters tell stories, and this poster tells an interesting tale of two small countries, on different continents and with vastly different cultures, banding together during the Cold War. Just as interesting as this story is the poster's beautiful artwork which depicts a significant symbol drawn from west African culture. This is a poster you won't want to pass up. 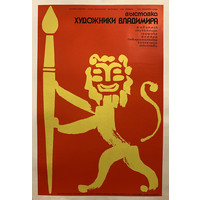