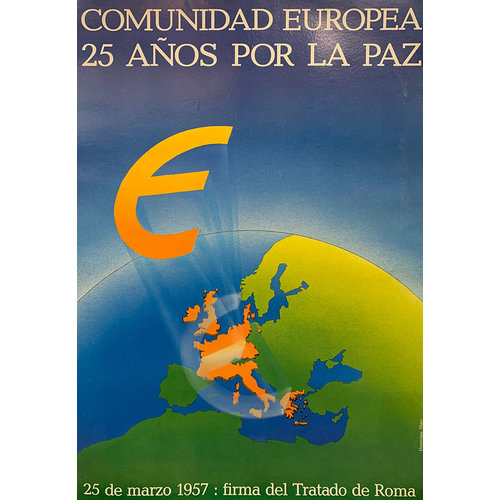 This fascinating and very rare poster marks the twenty-fifth anniversary of the adoption of the Treaty of Rome (also called the EEC Treaty) which created the European Economic Community.  Signed by Belgium, France, Italy, Luxembourg, the Netherlands and West Germany on March 25, 1957, the Treaty was intended by these six countries to facilitate trade among them through integration and economic growth.  The EEC Treaty was one of several treaties among European countries that preceded and resulted in the formation of the actual European Union (EU) in 1993.

In this poster a large, orange “E” in the sky casts a protective shadow over the countries in Europe that had signed the EEC Treaty as of its twenty-fifth anniversary in 1982. By then, the member countries had grown from the six original countries to ten, with the addition of Denmark, Ireland and the UK (1973) and Greece (1981).

One of the countries not under this protective "E" shadow is Spain, shown in green on the map.

What is interesting is that this poster is in Spanish.  Its title, Comunidad Europea 25 Anos Por La Paz, translated into English, means, "The European Community 25 Years of Peace."  The Spanish words at the bottom of the poster, "25 de marzo 1957: firma del Tratado de Roma," note that the Treaty of Rome was signed on March 25, 1957.

This unique poster reveals the time, effort and patience over many years that eventually resulted in the formation of the EU, an especially interesting topic given the questions currently raised as to its continued viability.

Vintage posters tell bits of history that are often forgotten.  This rare poster is a wonderful example of that. 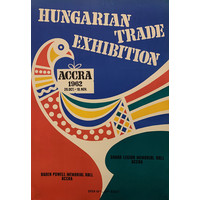