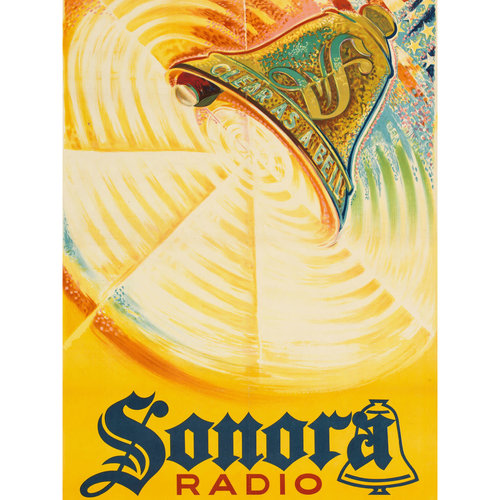 This luminous poster for Sonora Radios shows golden sound waves flowing from an old-fashioned bell (complete with a clapper) that must be tolling, judging from its angle.  Written on the rim of the bell is the company’s slogan: CLEAR AS A BELL. The bell appears again at the bottom of the poster as part of the company’s name.

Continuing to reinvent itself, Sonora produced chimes in the early part of the twentieth century, then phonographs, before making radios starting in the early 1920s.  In the early 1930s, it began making radios in France at a factory in Putreaux, near Paris.  This poster, which bears this French address, was most likely published in the early 1930s. Even though Sonora changed its products (and name) during these years, it kept its old-fashioned bell and slogan in its name and advertisements.

Interestingly, nowhere in this poster does a picture of an actual radio appear.  Rather, Sonora is promoting its radio’s superior sound and relying on this to sell its radios.

Italo Orsi (1889 – 1947) was an Italian illustrator and prolific poster designer.  He typically signed his work as just “ORSI,” which appears in this poster (in the plate) in the upper left corner.

This vintage poster provides a wonderful look back to a time before television when radios were changing the world. And it's a quaint reminder of how technology, starting with chimes and ending with computers, swept through the twentieth century and remade our lives.

With its mellow yellow hues and historical importance, this poster will add sunshine and interest wherever it is placed.