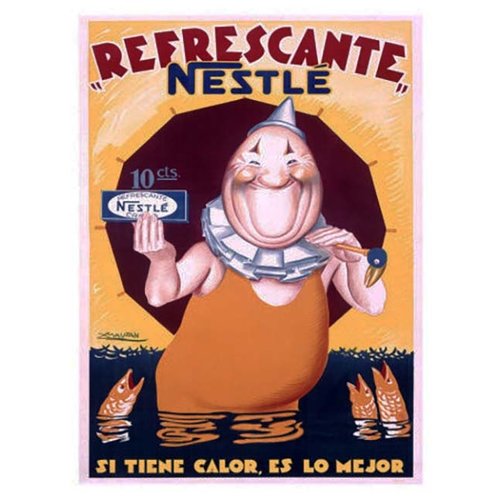 This rare vintage poster by famed poster artist Achille Mauzan grabs our attention from the first look. We can’t stop staring at the comical yet odd figure who is the focal point. He has a smile that starts with his three chins and goes all the way up to his eyes; the smile is so exaggerated it makes the viewer smile! His triangular eyebrows add a jester-like look, and his bulbous nose and plump, jolly cheeks make his large oval face appear thrilled with his Nestle bar. It’s a face of sheer delight and we think we’d like this strange little man were we to meet.

Adding to his engaging face is his peculiar attire: a one-piece bathing suit (worn by men in 1930 when this poster was designed), a tiny dunce cap, and the ruched collar of a Harlequin.  It’s clear why he is wearing a bathing suit, as he has waded into hip-deep water, but the cap and the collar are a mystery, though both definitely confirm our initial opinion that he is a bit of a goofball. He holds an umbrella in his left hand to protect him from the bright yellow sun shining in the background.  In his right hand he is holding up a bar that reads, “Refrescante Nestle Crema” (with the word “Crema” partially obscured by his hand). Translated from the Spanish, this says, “Refreshing Nestle Cream.”

This repeats the message headlining the poster, “Refrescante Nestle.”  The bottom of the poster says, “If it’s hot, it’s the best.” As added humorous elements, snapping fish are jumping out of the water, presumably to grab the Nestle treat, and the handle of the umbrella is a toucan bird that is eyeing the fish, its beak slightly opened.

Achille Mauzan (1883-1952) was born in France but moved to Italy in 1905 where he began work as an illustrator and a designer of film posters, later designing posters for Italian War Bonds. After the war, with his work influenced by the Art Deco and Cubism styles, he set up his own publishing house in Milan. In 1926 he moved to Argentina and established Affiches Mauzan, a poster publishing firm in Buenos Aires.

During his prolific career, Mauzan was in high demand as an artist and designed over 2,000 posters.  The characters depicted in his posters, as in this Nestle poster, were typically more complex and deeper than those designed by other artists of the era. His style was also marked by humor, as also illustrated in this poster.

This very rare poster, Refrescante Nestle, was designed in 1930 in Argentina, not too long after Mauzan arrived in that country and at a time when Nestle had just begun doing business there.

This large poster will dominate any room where it is hung and will generate untold amounts of attention and conversation. It belongs in every collection of vintage posters. 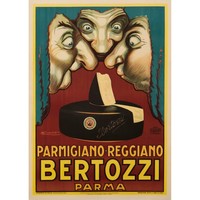