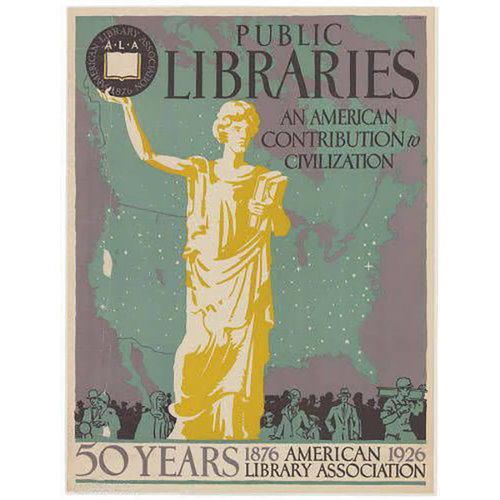 “PUBLIC LIBRARIES AN AMERICAN CONTRIBUTION TO CIVILIZATION” proclaim the not-so-modest words at the top of this poster.

Tying this civilization theme to ancient civilizations, the artist has drawn a classical figure in the foreground who is clad in a draped toga similar to those worn in ancient Greek and Roman times.  He is holding books in one hand and an American Library Association seal in the other.

Behind this curious figure is a beautiful map of North America with yellow sparkling stars scattered throughout the continent. The stars are a lovely compliment to the yellow tones of the toga-clad figure. It's not clear what the stars signify, but two distinctive stars in particular shine a bit more brightly than the others: one about where Chicago is and a bigger one about where Philadelphia is.  With the continent drawn in heather green and the oceans and lakes drawn in purple, the overall colors blend in a beautiful, visually pleasing way. It’s a very pretty poster.

At the bottom in the foreground are everyday people -- civilization as we recognize it, with workers, businessmen, and families – going about their usual business; behind them are black silhouettes of other ordinary people.

What is interesting about this 1926 poster is that, despite the words at the top, it is not about celebrating American public libraries or any anniversary having to do directly with libraries.  Rather, it honors the fiftieth anniversary of the American Library Association, as expressed at the bottom of the poster.  Founded in 1876 during the Centennial Exposition in Philadelphia, the ALA was created to provide leadership for the development of library services and the profession of librarianship.

With the ALA founded in Philadelphia and headquartered in Chicago, it is easy to understand why the stars on the map which shine the brightest mark those two cities. It’s also interesting to note how the ALA, by implication, ties its existence and history to American public libraries' contribution to civilization.  One of these posters is in the permanent collection of the ALA archives.

This lovely, extremely rare, original poster will make a fine addition to every poster collection.