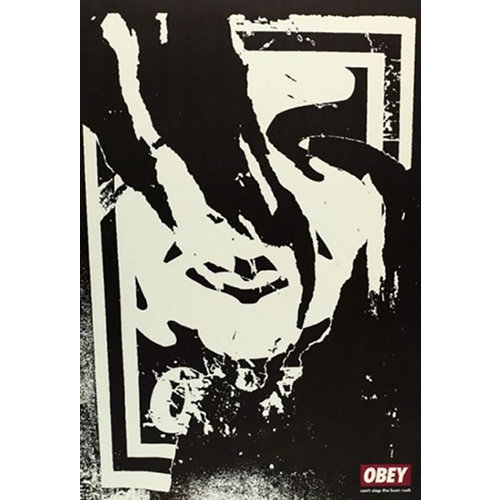 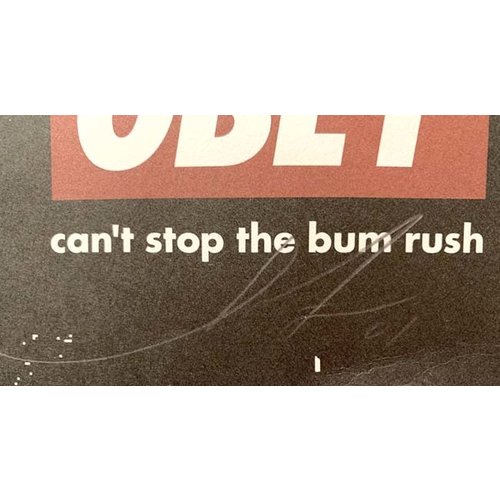 This black and white poster, Obey: Can't Stop the Bum Rush, was designed by street artist Shepard Fairey.  He created the illusion that there are 3 (maybe 4) layers to this poster, with the top layer showing an image in white of the face of André the Giant (so we are led to believe).  This face is impossible to identify, however, as the top layers of the poster appear to have been partially ripped off, leaving the black layer underneath  exposed where parts of the face should be.

Andre the Giant (1946-1993) was a French professional wrestler and actor.  Many will remember him from his role as the giant in the movie Princess Bride.  Fairey's interest in images of Andre the Giant developed when he was an art student at RISD in the late 1980s. From this early interest, Fairey developed a more generalized "Obey Giant" theme which served as the inspiration for later projects of his.

Frank Shepard Fairey (b. 1970) is an American contemporary street artist and activist who was born and raised in Charleston, South Carolina.  Not only is he known for his André the Giant /Obey art, but he is also known for his Barack Obama “Hope” poster.  Fairey’s work combines icons from consumer culture that are seen daily in a context that is unrelated to them and have no explanation.