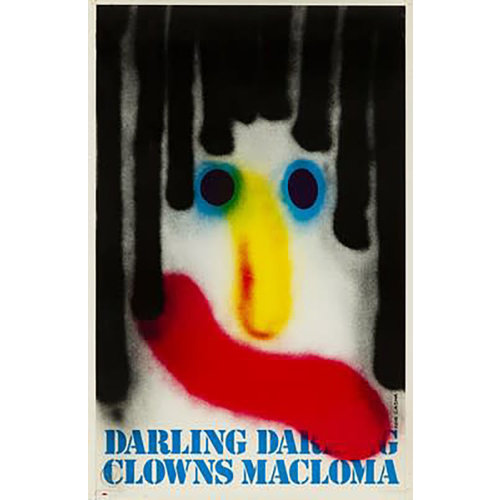 This poster is an advertisement for Les Macloma, a company of French clowns who performed in Paris and around the world from the mid-1970s to 2005. They usually performed on theater stages, rather than as traditional clowns in circuses getting laughs by running around the tent between the main acts. But, like all clowns, the goal of Les Macloma was to entertain their audience, and they did this not through dialogue but with comedic gestures, actions and body language. Their comedy was directed at themselves and sometimes their audiences.

Their clown-style comedy "Darling Darling" poked fun at the relationships between men and women and was billed as "A Clown Show for Adults." That Les Macloma was not a company of traditional clowns is obvious from this poster portrait of one of the clowns -- not quite grotesque but slightly off-kilter and somewhat creepy, with a crooked red slash serving as a clown-size smile, a crooked nose, and wide, round penetrating eyes.

This clown is clearly not a children's clown. Nonetheless, he's a mesmerizing character (look at those eyes!) whose expression and appearance, dominated by the black hair and red mouth, draw the viewer in. That explains why this poster is so popular and why it's considered the iconic work of Rene Casha (b. 1948), the French artist who created it.

This is one of those posters that gets more interesting and compelling with each viewing.