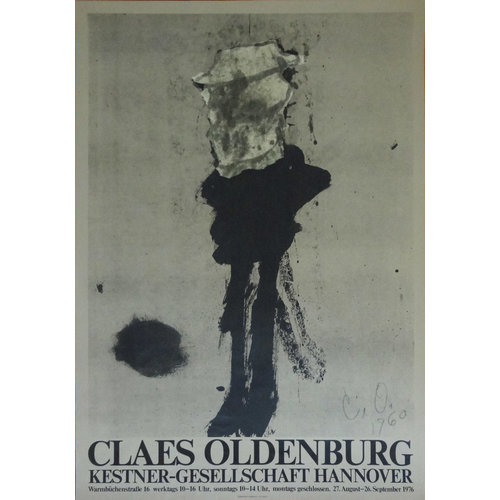 This work by Claes Oldenburg was the exhibition poster at the Kestner-Gesellschaft  art gallery in Hannover, Germany in 1976.  The image in this poster is a humbled-looking figure with a bag over his face and a tail, perhaps a symbolic representation of Oldenburg himself.  There is something not very pleasant with this figure - like an untrammeled fantasy that is dangerous and needs to checked -  perhaps not dissimilar to some of Oldenburg's art work.  The image was also used as the exhibition catalogue cover, for which world-renowned art critic Barbara Rose was one of the writers.

In the 1960s he created soft sculptures with canvas and vinyl, making cartoon versions of everyday objects such as Two Hamburgers and Toilet.  Continuing his fascination with ordinary items as sculpture, he took small objects and made them gigantic, thereby stripping them of their functional utility, as illustrated by his Clothespin (1976), a public sculpture in Philadelphia. His work, often whimsical, has ranged from drawings and paintings to public sculptures, both mini and monumental.