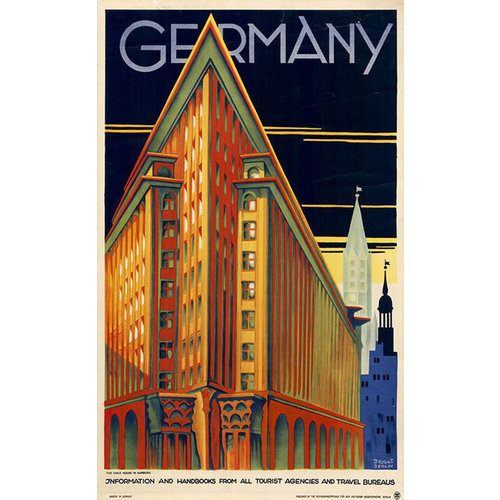 The Chile House building in Hamburg absolutely glows in this art deco style German tourism poster from around 1925.  The image of the building is captured seemingly the moment the sun starts to set on it, with brilliant reds, oranges, yellows and greens tinting the top left side of the building, and more subdued hues of the same colors appearing on the other side and on the bottom which are in shadows. The last streaks of sunlight line the sky and light up a smaller building in the background, but it’s the waning light on the Chile House that makes this poster so compelling.

The Chile House was built between 1922 and 1924. It was commissioned by Henry B. Sloman who made his fortune trading saltpeter imported from Chile, hence the name “Chile House” (or, in German, “Das Chilehaus”). Architecturally, the building is noted for its top, which is reminiscent of a ship’s prow, its facades which meet at sharp angles and its recessed upper stories.

This striking poster was designed by Wilhelm (Willy) Dzubas (1877-1947) who was then a graphic designer and decorative painter in Berlin.  He emigrated from Germany to London in 1938.  His nephew was Friedel Dzubas (1915-1994), German-born American abstract painter.