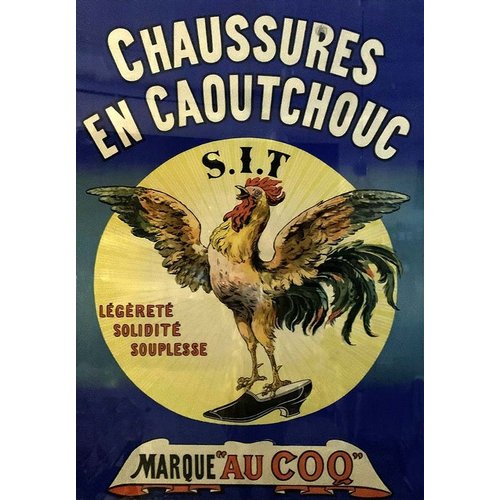 Often a rooster will flap his wings as he’s starting to crow, and this is exactly what this handsome fellow is doing.  He no doubt is crowing about his new shoe (and, oddly, there is just one) because, as spokes-bird for his brand Marque au Coq (Mark of the Cock), that is his job. The rubber shoe (chaussure caoutchouc) he’s standing on is lightweight, solid and supple - everything that roosters and humans want in a shoe, so he has a lot to crow about.

This charming French poster from the early 1900s is beautiful and elegant. The yellow letters stand out against the blue background, making a lovely contrast, and the yellow circle in which the bird stands illuminated makes him look all the more majestic.  The fine details of his feathers and their subtle shading of greens and golds attest to the poster artist’s skills.

A rooster might seem like a strange spokesman for shoes, but in France this is not the case.  The Latin word for rooster is gallus, and in Roman times, the area called “Gaul” was an area that now includes present day France.  The similarity of these Latin words has resulted in the rooster being adopted throughout parts of France as an unofficial symbol of the country.

Created by French artist Gus Bofa (1883-1968), this poster would look great in any room, especially in a kitchen where this fine fellow would inspire early risers.