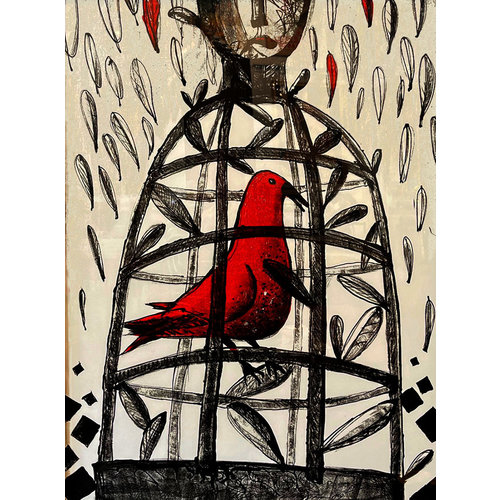 This fascinating print titled Cage for Cuckoo is signed, dated and annotated A/P (Artist Proof) in pencil by the artist, Kestutis Musteikis (b. 1955), a prominent Lithuanian artist and sculptor. It is printed by The Lakeside Studio in black and red on Arches cover, white (archival paper).

The focal point of the print is a red bird (presumably the cuckoo) in a cage which is actually the ribcage of a human. Above the ribcage is the person’s neck and the lower portion of his face, but we can see only the mouth (turned down) and the lower part of the nose.  The rest of the face is not shown.

Lithuania was one of the countries annexed by the Soviet Union after WWII. It remained under Soviet rule until it declared its independence in 1990.  This work is dated 1989, shortly before Lithuania broke away from the Soviet Union.

The cuckoo is a common bird in Lithuania and figures prominently in Lithuanian folklore. Perhaps the caged cuckoo in this lithograph represents the country of Lithuania imprisoned behind the iron curtain, singing for its freedom.  Its red color could represent the heart of the country, locked in an iron cage but still beating.