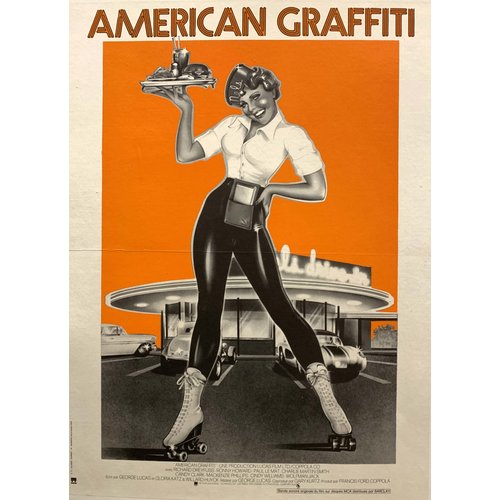 This captivating poster advertises the release in France of George Lucas’ 1973 film American Graffiti. Set in 1962 in Los Angeles, American Graffiti is widely regarded as one of its generation’s great coming-of-age films, and this poster recreates a little bit of that 1960s teen scene.

Cars and their impact on teen life were prominent themes in this movie, so it is very appropriate that the place chosen for this poster is a drive-in.  It shows a waitress wearing roller skates (yes, that really was done) and carrying her tray of drinks and food aloft to her customers parked in nearby cars.  She’s wearing tight, tapered pants and a natty little hat reminiscent of that era. Her look is quintessential early 60’s, and the cars and the drive-in itself that are shown in the background reflect that same era.  Interestingly, this 60’s vignette is portrayed in black and white (perhaps to remind us that this was an earlier time), while the background sky is boldly orange.

David Willardson, an American commercial artist based in California, is credited with creating this poster.  He is known principally for his work in drawing Disney characters and has pioneered the concept of “pep art” – referring to the energy and passion invoked in action painting.