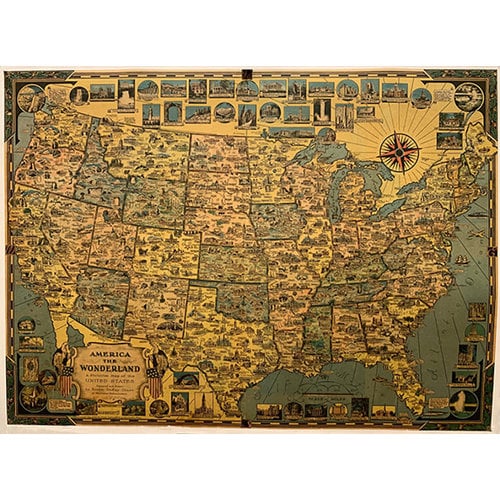 This 1941 map titled “America the Wonderland” was described by the mapmaker Ernest Dudley Chase as “a pictorial map of the United States.”  Each state is illustrated with exquisitely detailed pictures of landmark buildings, points of interest and whimsical attractions.

Chase (1878-1966) was one of the most prolific and famous pictorial map artists of the 20th century, producing about 50 maps published from the 1930s to the 1960s. He started his career as a graphic artist and did not begin drawing maps until he was forty-nine.

This fascinating map indeed shows America as a country full of wonderful places and fun attractions.  The historical perspective which one gets in looking at this map eighty years after it was first published makes it even more interesting.