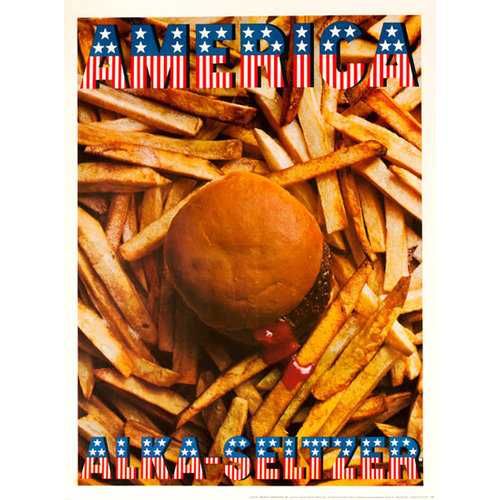 "Burgers, Fries and Alka Seltzer: the All-American Meal."  That's what this advertisement for Alka Seltzer is proclaiming with its photo of a hamburger and fries and  the words "America" and "Alka-Seltzer" written in a red, white and blue flag motif.

This advertisement was one of four posters created in 1968 for Miles Laboratories,  the US pharmaceutical company that made Alka-Seltzer.  The other three posters promoted the brand brand internationally, with posters in German (fried sausage and potatoes), Italy (peppers and onions smothering salami) and Spain (a huge plate of paella). Each carried the message that these were indigestion-inducing meals that should be accompanied by a curative dose of Alka-Seltzer.

Alka-Seltzer, which was developed by Maurice Treneer, head chemist at Miles Laboratories, in Elkhart, Indiana, was introduced in 1931.  It was marketed for relief of indigestion, heartburn, fever, headaches, aches and pains and hangovers. Made from sodium bicarbonate, citric acid and aspirin, the effervescent tablets released their active ingredients when dissolved in water.

Many Alka-Seltzer advertisements are now considered classics. Who of a certain age can forget Speedy Alka Seltzer and his jingle from the 1960s and 1970s, “Plop Plop Fizz Fizz, Oh What a Relief It Is.” A subsequent Alka Seltzer marketing campaign popularized the phrase, “I can’t believe I ate the whole thing.”