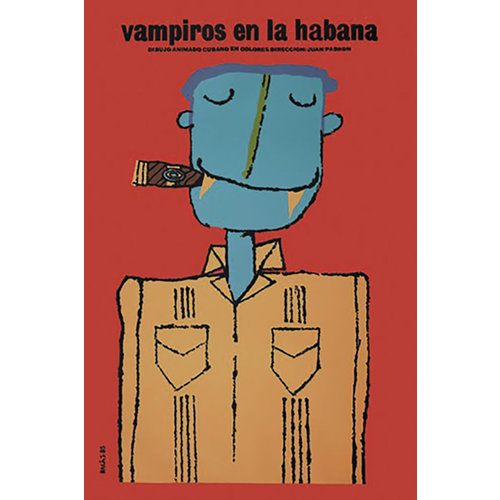 This hand silk screened poster by famed Cuban poster artist Eduardo Munoz Bachs was made for a 1985 animated Cuban film titled, "Vampiros en la Habana" directed by Juan Padron.  The film takes place in Cuba in 1933, and the story involved a battle among a vampire family in Cuba and vampires from the USA and Eastern Europe. Some see the movie as just a spoof of gangster and vampire movies; others see it as a movie with a political statement, with the vampires from outside Cuba representing the evils of capitalism.

Bachs sees the movie as an opportunity to draw a brightly and boldly colorful caricature of a vampire gangster, complete with yellow fang-like teeth (vampire teeth, obviously) and a cigar in his mouth (as frequently seen in the old gangster movies).  The colors are what make this poster so absolutely stunning.

Eduardo Munoz Bachs (1937-2001) was born in Spain, but his family emigrated to Cuba in 1941. Though he had no formal art training, he began designing posters in 1960 for the Instituto Cubano del Arte e Industria Cinematograficos, the state-run organization formed after the revolution to promote Cuban films.  During his lifetime he designed over 2000 posters for the ICAIC and is considered one of the great Cuban film poster artists of his era. His posters are typically characterized by his use of bright and bold colors and his wry sense of humor, both of which are evident in this poster. Many of his poster designs have a “cartoon” quality, also evident here, and in fact he drew a cartoon strip in addition to designing posers. He also illustrated books and painted. 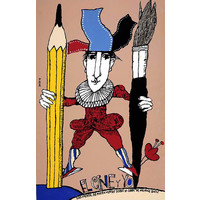 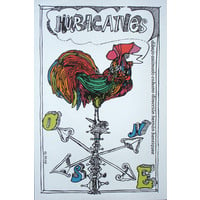