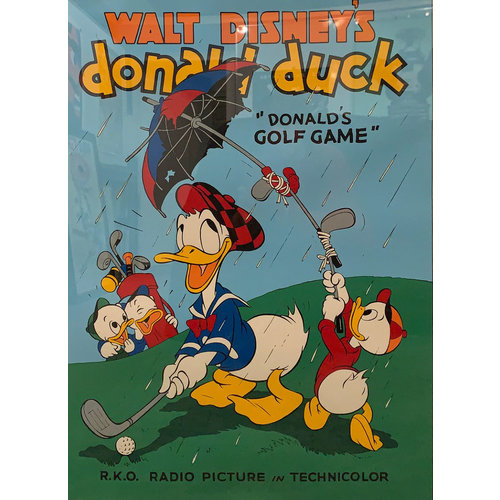 The orange and yellow words at the top of this charming offset lithograph state, "Walt Disney's donald duck."  Below these words, in black capital letters, appear the words DONALD'S GOLF GAME, which is the name of a Disney animated short film released by the Walt Disney Company in 1938. At the bottom of the lithograph, it states, "R.K.O. Radio Picture in Technicolor"

The scene shows Donald himself, wearing a jaunty Scottish-style golf cap, trying to hit the golf ball in the rain. His caddies --- nephews Huey, Dewey and Louie of course -- watch, with one holding up a worthless, tattered umbrella whose shaft is made from golf clubs tied together. The other two, in the background, are giggling at the hapless Donald.

This original lithograph, released to promote the animated film, still makes us laugh today, more than eighty years after the world was introduced to Donald and his nephews.