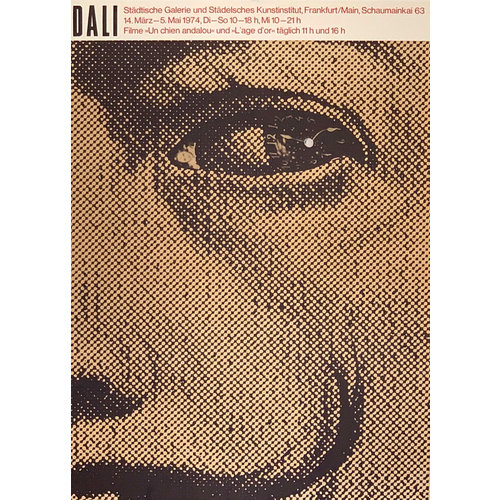 The 1929 film Un Chien Andalou (An Andalusian Dog), filmed in France, is a silent movie considered one of the seminal films of Surrealism and of the avant-garde cinema genre of that period.  The 1930 film L’Age d’Or (The Golden Age), one of the first sound films made in France, is a satirical comedy heavily influenced by Surrealism.  Both films are considered to be among Brunel’s masterpieces.

One famous but difficult-to-watch sequence in Un Chien Andalou features an eye being slit by a razor.  The black and white image on this poster, overlaid by a series of dots, shows one-half of a face with an eye that has only partial vision. Most likely this image is taken from that film segment.

Brunel (1900-1983), a leader of avant garde Surrealism in film, was a prominent international filmmaker and director.

Dali (1904-1989), though recognized for his collaborations in writing scripts for films, is famous worldwide as a Spanish surrealist painter and printmaker, influential for his explorations of subconscious imagery.

If you have a passionate interest in the early days of cinema and the filmmakers of that era or are interested in the influence of Surrealism on film, you will be fascinated by  this poster.